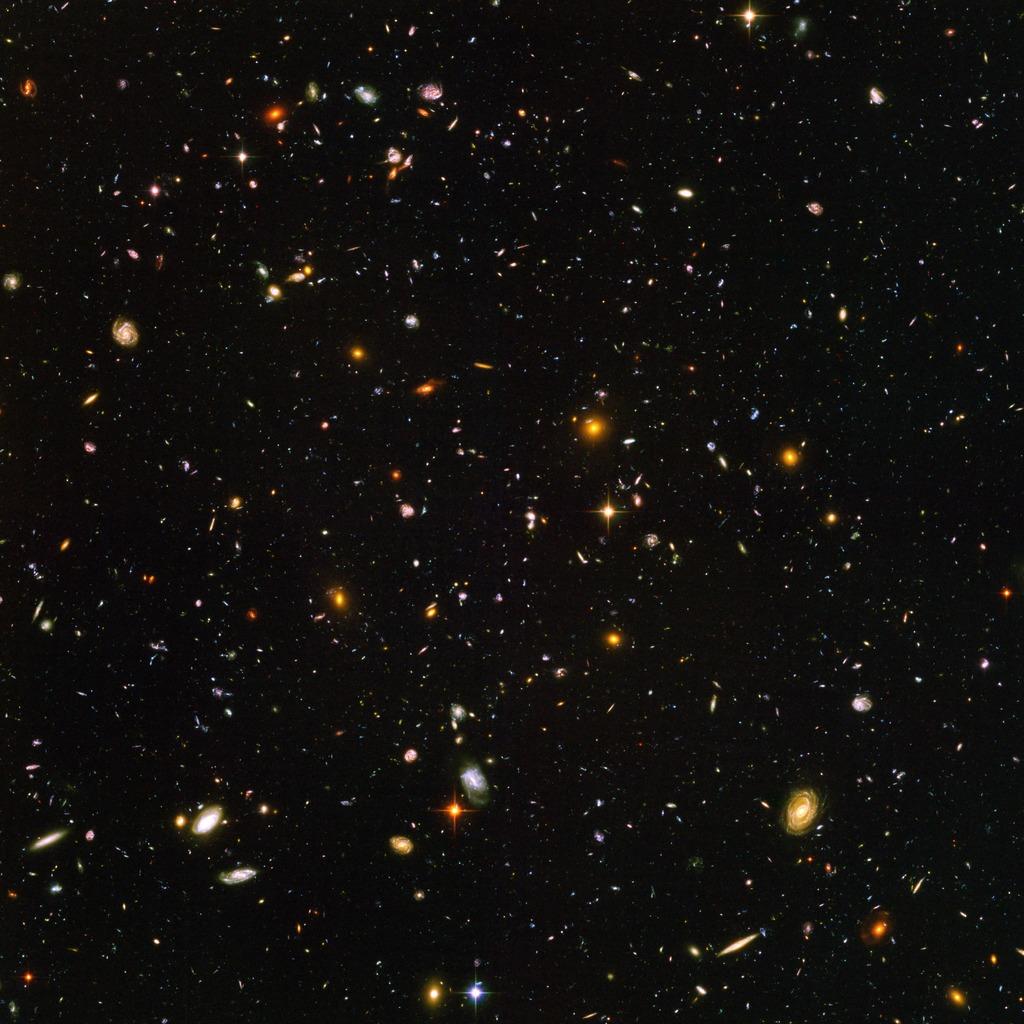 You can explore the entire universe, up close and personally, for FREE!

The Hubble Ultra Deep Field image shows galaxies out to about 13 billion light years distant. The UDF is like a deep core sample of the universe; it contains approximately 10,000 galaxies, of which about 100 are the most distant known objects in the universe. Cosmologists have a rule of thumb - really, an educated guess - that there are about 100 billion stars on average in a galaxy, and about 100 billion galaxies in the observable universe. There are an undetermined number of planets orbiting a typical star.
One of the major barriers to being able to travel far in the cosmos is the fact that, as far as is known, nothing in this current epoch of history is able to go faster than the speed of light. If we could move at close to the speed of light, there are several dozen stars within our stellar neighborhood that would be reachable in a human lifetime. But the rest of this vast cosmos is out of reach. But imagine that you could travel at essentially infinite speed, and reach any spot you desired in the universe in an instant. Let's say that you would like a decent tour of a couple to a few parts of each planet you were going to explore, so that you would like to spend at least three days on each world. You could theoretically visit about 120 planets per year. If you had a 100 year lifespan plus, you could see about 12,000 planets in a lifetime. This is a mere drop in the ocean!
So, if there were no speed barrier, you still could not even "skim the surface" of the universe before you died. What is God saying? He is saying that you need eternal life. Nothing short of that will enable you to savor God's creation.

Why is the universe there and why can't we get to it?

Everything on earth exhibits not only intelligent design but purpose. The parts of a cell have the purpose of being able to make the cell function. The cells in a body are there to make the body function. Rain is there to provide life-sustaining water to the earth. Food is there, also, to support the life of living things. Are we to assume that purpose only extends to the earth and its environment? That is not a reasonable idea. If the earth is there for a purpose, then the universe is, also.

So, what is the purpose of the universe? Man is the pinnacle of creation, and the earth is there for him and his fellow creatures. It stands to reason that the universe is there for him, also. Or, at least, it was. One might argue that the universe is there not only for man but for other, human-equivalent aliens on exoplanets. But there is compelling reason to conclude that there are no human-equivalent beings elsewhere in the cosmos. I don't have the time or space to get into that here. The existence of our universe begs the question: "Why are we denied access to the cosmos?"

There IS an available answer to this question. Again, I don't have the time or space to defend this assertion right here, but there is a viable claim that the Bible is the Word of God: see The GOSPEL. Based on that claim, we have the implied answer in hand, as to why we can't go the galaxies, even though they were created for us. The problem is that man's original purpose in being created has, for the time being, been thwarted because man's original connection to God has been broken. The severance of this relationship has altered and shortened the course of history of this entire creation.

If you believe in the mainstream scientific community's view of origins and natural history, you are not only giving credence to something that is scientifically refutable, but you are also missing out on the whole reason why and how we and the rest of creation came to exist, and why there are natural imperfections, such as death, disease and disaster. Again, I don't have time to go into apologetics - defense of the Christian faith - right here and now; I devote more space to it in the Bible link mentioned above. Suffice it to say that the "science" which "refutes" the Bible is itself scientifically refutable. The Genesis account of creation and earth history is defendible as the truth.
With that established, we can come to understand some very important facts. Our first two parents, Adam and Eve, sinned against God and we have all inherited from them fundamentally evil, sinful natures. We are all originated as sinners, separated from God. Therefore, the history of this world and creation are being cut short; that is why we are denied access to the universe. God is saying that we have a big matter to deal with before we ever go to the galaxies: SIN.

To see a fuller treatment of this concern, see The Gospel. But to get right to the point immediately, we must each, individually, repent and give our life to the Lord Jesus Christ. More on this in the "Gospel" article. Once we have done that, eternal life is ours, and so is the future universe, the cosmos to come!

The stars are ours

The universe belongs to born again Christians. Only, not this universe, in this life. The next universe, in the next life! There is a biblical basis for asserting this. Revelation 21:1 says, "I saw a new heaven and a new earth, for the first heaven and the first earth had passed away." II Peter 3:14 says, "New heaven and new earth, the home of righteousness." God is going to replace this cosmos, which was cursed due to the sin of Adam and Eve, with a new, eternal cosmos, which will be perfect! It is the new, perfect universe the Christians will get to explore and utilize in eternity!

Another Bible passage which relates is Psalm 16:11: "In thy presence is fullness of joy; at thy right hand are pleasures for evermore." One can readily conclude that some of the pleasures "at God's right hand" are the ability to enjoy the natural cosmos.

I Timothy 6:17 reads: "Command those who are rich in this present age not to be haughty, nor to trust in uncertain riches but in the living God, who gives us richly all things to enjoy." God gives us richly the whole universe to enjoy! Not in this age, but those who are His will have the cosmos to enjoy in the age to come.

Romans 8:32 says: "He who did not spare His own Son, but delivered Him up for us all, how shall He not with Him also freely give us all things?" Now, doubtless, most commentators would say that this verse relates to "all things pertaining to godliness." But I think it secondarily refers to all things - literally!

Psalm 110:1, as quoted in Hebrews 2:6-9:
6 But one testified in a certain place, saying:
[beginning of Old Testament quote] "What is man that You are mindful of him, Or the son of man that you take care of him?
7 You have made him a little lower than the angels; You have crowned him with glory and honor, And set him over the works of your hands.
8 You have put all things in subjection under his feet. [End of OT quote]"
For in that He put all in subjection under him, He left nothing that is not put under him.
9 But we see Jesus, who was made a little lower than the angels, for the suffering of death crowned with glory and honor, that He, by the grace of God, might taste death for everyone.

In the David Jeremiah Study Bible, the notes on the above passage read:
2:5,6 | In speaking about the world to come, the writer implies a contrast with another age: the present one. In the world to come, angels will not be in charge, but in the present age, they rule this world by ministering with God in a role above humans but below God. (Ps. 8:4-6; 2 Pet. 3:13)
2:7 | Humans are a little lower than the angels in several ways. Humans are physical beings, and angels are spirit beings; humans are subject to death, but angels are not; humans are bound by time and space, but angels are not; and in this age, humans are bound to the earth, but angels are not. In God's original plan, human beings were second only to the angels in God's creative hierarchy.
2:8 | God originally intended that humanity should have universal dominion - that all things would be put...in subjection under him. Adam and Eve's rebellion (Gen. 3) postponed God's plan. At this time, Jesus rules over creation in fulfillment of Psalm 8. Yet one day God will restore humanity to its intended place of authority (Ps. 8:6).
2:9 | In order for humanity to be restored to God's original intention, God had to intervene. God's own Son had to become a man (a little lower than the angels) and taste (fully experience) death for every individual (Rom. 5:17).

Besides the Bible verses which back up the claim that God's people will get to interact with the universe, there are some shear facts and logic that apply. The desire to explore is intrinsic in the human experience. Just as people have sought new lands on earth, so many people have had, and do have, a yearning for the stars. In his book Mere Christianity, C.S. Lewis writes:

To add a statement to this list: people desire to explore; well, there are things to explore. There is now a universe, and in the future there will be a new universe, to explore.

The purpose of mankind

I used to think that the destiny of mankind, and the ultimate good, was to expand across the cosmos. Since, I have realized we have a higher calling. The Westminster Shorter Catechism states: "Man's chief end is to glorify God, and to enjoy him forever."

The main purpose in becoming a Christian is not to explore the universe. The main purpose is to experience love and joy in God's presence. The reason God created Adam and mankind is to have mankind obey, love and fellowship with Him. Everything else that God gave Adam in the Garden of Eden and the earth was a secondary set of gifts. The primary gift was life in communion with God. God throws in the secondary gifts as benefits. Having the universe to explore is a perk of knowing and obeying God!

As quoted above, the Bible says that in God's presence is fullness of joy and at His right hand are pleasures for evermore. Jude 24 reads: "Now to Him who is able to keep you from stumbling, and to present you faultless before the presence of His glory with exceeding joy..."

C. S. Lewis says, after talking about how desires have fulfillments, "If I find in myself a desire which no experience in this world can satisfy, the most probable explanation is that I was made for another world." Don't you want to live forever in glory, joy and pleasure? Of course you do! God has put that desire into you. He intends to fulfill it, but there is a condition. You must surrender totally to the Lord Jesus Christ, giving Him your life. See The Gospel.